Almost six months to the day I left, I gratefully found myself back in the U.S. Now, as I sit in the warmth of a friends’ charming little apartment in Roanoke, Virginia, with a view of snow covered roofs and the homey sight of woodsmoke pouring from chimneys, I find myself reflecting on my time out of the country.

From late April until late October, I traveled in India and Australia, and would like to share some of the highlights of this journey with you now. I had intended to keep a blog of my travels, but like so many good intentions, this one was shattered when I arrived in India and experienced the uncertainty of electricity or a reliable Internet connection. That, along with the projects I got involved with, short-circuited my ability to share with you my thoughts and experiences while in the midst of them.

I was occasionally able to document photographic scenes of my experiences in India because Face Book was, for some reason, the most available portal for sharing when I had Internet access. Although they say a picture is worth a thousand words, neither my experiences along the way nor my experience of them could be captured through a camera lens.

This Travel Blog begins with my purpose(s) behind this particular journey. As a 71 year old, semi-retired Wellness Coach,Trauma Release (EFT/Tapping) practitioner, and Mindfulness Meditation Facilitator, I am in search of an affordable lifestyle; one that will allow me to continue my healing work and support the healthy, active life that has gotten me this far.

A further motivation was the request I had received from a friend, a younger Indian woman with whom I had studied in a small ashram in Northern California. She had asked me, several years earlier, if I would help with the spiritually-based work she was doing in India. Although I had turned her down at the time, I eventually grew tired of the effort to support myself in the U.S., and thought I would check out the possibility of living in India while fulfilling her request. I also planned to visit my teacher, Swami Dayananda Saraswati, while he was still alive. He had been ill for many years and I wanted to see him before he died.

I had also set myself the goal of meeting everything with an open heart and seeing in all of it, a sense of the sacred. Come along if you want to know how I did . . .

In late April, 2015, I boarded a plane out of New York’s LaGuardia airport, having left my sporty little red Honda Fit in the care of a friend in the Pennsylvania Poconos. Thirteen hours later, my plane landed in Abu Dhabi where I had a 4 hour layover before continuing to Mumbai, India. Sited in one of the richest countries in the Middle East, Abu Dhabi’s airport is a vast and sprawling, modern and sparkling symbol of wealth.

I love to people-watch, so Abu Dhabi’s location as a major travel hub gave me a wonderful 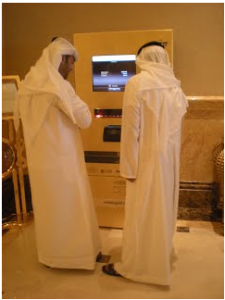 opportunity to witness people of all races and nationalities. Dark-skinned men of all shapes and sizes wore their native Bedouin garb known as the dishdash (long white robe) and the keffiyeh (head scarf) while many of the women I saw wore the abaya (long black robe) and hijab, the head-scarf which covers the neck and part of the head.

Although I didn’t think about it at the time, it’s interesting how even the color of their clothing speaks volumes about women’s role in this oh, so patriarchal society. I haven’t been able to find any clear reasoning for this color distinction, but the traditional dress for men is white while the women are wearing black;

a color that cannot be very forgiving in the desert heat!

I will be forever grateful to the wonderful Anju Menon, a lovely Indian doctor who lives and works in Cairo, Egypt. Anju was on her way back to Cairo, and took me under her wing, helping me make my way around Abu Dhabi’s sprawling and, at times, confusing airport. We spent our waiting hours together, shared a meal and became FB friends that day.

I arrived at Mumbai’s International terminal 3.5 hours later and after making it through Customs, boarded a bus to the domestic terminal where I waited several more hours before boarding my final flight into Coimbatore, in Tamil Nadu, South India. Mumbai’s International airport is incredibly beautiful and it felt as if I had arrived in an India eons more modern than the one I had left just three short years earlier.

That sense of modernity quickly evaporated when I arrived at Mumbai’s domestic terminal for the final leg of my journey to Coimbatore. International had left Domestic in the literal dust. When I finally arrived in Coimbatore, I entered the great race to find a luggage cart, and after collecting my checked bag from the turntable, walked down a long concrete hallway to the outside waiting area. This is the weary travelers’ first experience of India, and the place where hundreds of taxi and other drivers stand behind flimsy ropes, awaiting their tired passengers.

I can’t begin to describe the huge sense of relief I felt when I saw a dark-skinned, smiling man holding up a small signboard with my name printed on it. The management at my teachers’ ashram, where I would spend the next few days, had, indeed, received my arrival information and sent a car to pick me up.

Many women, when they hear of my travels, praise my courage and say they can’t imagine traveling alone to such far off places. My truth is that if I didn’t have friends or someone at the far end of my journey, I probably wouldn’t be doing it either! Through some amazing grace, I came to know the majority of those living abroad as co-travelers on the spiritual journey.

Although I had visited India twice before, this was my first time in Coimbatore. I had heard

a lot about this city, but my Wikipedia search had not prepared me for the poor roads and shocking lack of infrastructure. Given Wiki’s reports of Coimbatore’s booming economy, I had expected a more modern city and found only dusty roads and half-built shells of buildings. I always try to enter new experiences with a healthy dose of curiosity and openness, but I was shocked by what I was seeing. It looked like either the remains of a city after a bombing or the beginnings of a booming metropolis. My first impression was that time had not been kind to the Coimbatore before me.

Once we left the city proper, the scenery — as well as my mood — began to change. Still, I wondered how I could ever find my way around if I were to live here. Could I ever find a place in this setting in which I would feel comfortable? Lastly, would I even want to live here?

Thanks to my friends, I would learn more about Coimbatore over time, and saw that, in certain parts of the city it was, indeed, fulfilling its reputation as one of India’s more modern, international cities. There were huge, bright, modern malls (which I generally avoid here in the states) that made me forget that I wasn’t in America, an optical shop that could have been anywhere in the world, and a small, yet wonderful Thai restaurant with extremely tasty hummus and pita bread! But I’m getting ahead of myself. It is still India, a nation in the process of development. There are many challenges and much to be done if India is ever to achieve first nation status.

Swamiji had long ago invited me to visit his ashram in the mountains outside of Coimbatore and I had finally made it! I loved that I was able to visit with him for several days before moving on to my friends’ ashram about an hour away, on the other side of the mountain range. As a Vedanta teacher, Swamiji had given his life to his students and devotees. Now he was in miserable health and needed help with everything, from walking to getting dressed.

In spite of the fact that his physical body was failing, he continued to hold classes and satsangs (informal gatherings) at his ashram. A three-year Vedanta course, like the one I had attended in Northern California, was in progress, with about 60 students from around the world. His previously booming voice was now so weak that he had to wear a microphone so the students could hear him. Swamiji often dozed off in the middle of a sentence during his Satsangs, but true to the skill he had developed long ago, when he woke up he’d pick up right where he had left off! No matter what his body was going through, his mind was still sharp.

It was difficult to see Swamiji in such poor physical health and my heart broke as I remembered, with gratitude, the vibrant, compassionate lion of a man with whom I had had the good fortune to study all those years ago.

I leave my story here for now, honoring the memory of my first teacher, 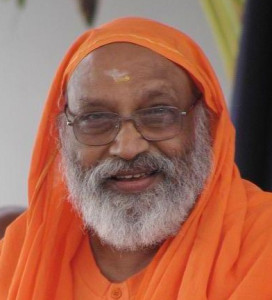