As anyone who has ever visited India will tell you, any attempt to describe their experience can only serve as a second-hand view. India must be experienced first hand to be believed. Having said that, I will try to share my experience in the hope that you will forgive my inability to convey anything approaching the wonder that is India.

There is much that I love about India and its people, and there is much that I find challenging. Thanks to Swamini Pramananda (Ammaji), a beautiful and wise teacher with whom I worked and traveled during my recent 4.5 month stay, I learned more about India’s history and the changes its people and culture have experienced over the centuries. Because I think it helps to put the current experience of India in context, I would like to share a very small slice of that history with you.

Through conversations with Ammaji and her sharing with groups of teachers, I understood that the country I saw before me was one that had been devastated by invaders and exploiters and was now, slowly yet steadily, reclaiming some of her former glory. According to Ammaji and a handful of historians, India — the Mother India that still casts a spell on poets and spiritual seekers, saints and artisans, has survived largely because of her spiritual and religious roots; roots known to us today as Vedic heritage. And this is what I love most about India.

This Vedic heritage — specifically the profound teaching of Oneness as found in the Vedantic texts — is what originally took me to India. In the early 80’s, at the end of three intense years of living with and studying Vedanta (the philosophical portion of the Vedas) in Northern California under the tutelage of Swami Dayananda Saraswati (Swamiji), I traveled to India to continue my studies and experience this culture whose customs were so intertwined with its philosophical and spiritual roots.

This is where the challenge of describing India and my experience there India begins. Outwardly, India is chaotic. Inwardly, she is beautiful. From the trash in the streets, the ubiquitous skinny dogs, sacred cows, honking horns, and sickening diesel fumes to the small shrines

and glorious temples that bless every neighborhood and every roadway throughout the country, the rich colors of handwoven saris and shawls, the pungent and intoxicating scents of India’s wild variety of spices, India is an assault on and a gift to the senses.

While I was aware of these striking contradictions during my two previous visits (and who wouldn’t be), my perspective this time was different. I wasn’t seeing India simply through the eyes of a tourist, but as a potential long-term resident. This trip would be my reality check.

My first month in India was downright fascinating. After visiting Swami Dayananda and attending classes for a few days at his ashram outside of Coimbatore, I traveled to the ashram of my friends, Swamini Pramananda and Swami Siddhabodhananda, at their ashram on the other side of the mountains. We had studied with Swamiji in a three year course in Northern California and in the 30 or so years since we’d last seen each other, they had both become sannyasins (renunciates) whose lives were dedicated to sharing the sacred teachings of Vedanta. We had reconnected during a pilgrimage that took me to Tiruvannamalai, South India in 2011 and I felt honored and excited to be in India with them now.

A few days after I arrived at their Coimbatore ashram, we headed North to Uttarkashi, a destination high up in the Himalayan Mountains. Or, as Ammaji had told me, a six-hour ride by jeep from Rishikesh, in the foothills of the Himalayas. Six hours in a jeep on those winding Himalayan roads? Ah, well, I thought, “Let the adventure begin!”

In spite of the treacherous roads we were traveling, I was amazingly calm, sitting there in the jeeps’ front seat, to the left of the driver. Ammaji had suggested that I take the front seat out of concern that if I sat in the back, I might get carsick on the winding roads. Since it is customary for the spiritual leader of a group to occupy this seat, when the official looking guard at our first checkpoint directed his bow toward me, we all got a good laugh. Simply sitting in this seat of honor and dressed in a white Indian blouse and shawl, I had magically become the spiritual leader of our little group!

That six-hour jeep ride up to Uttarkashi was simultaneously frightening and breathtaking! As we climbed higher and higher, the roads became narrower and narrower and the views 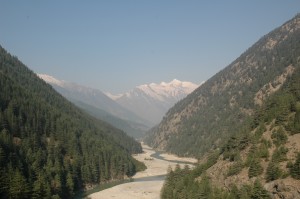 increasingly splendid. Looking out over the mountain ranges that spread before us, the white clouds overhead, and the blue, blue sky behind them, I almost forgot that our lives literally hung in the balance. In the west we take for granted the work of our highway crews — and the guardrails that keep us from tumbling over the edge of a cliff. On these ‘roads’ in India, survival depends on a combination of things: the skill of the driver, prayers, the mood of the gods, and our karma.

I loved this experience! I felt vitally alive. Alert to the fragility of life and the wonder of the natural world. Even on these treacherous roads, it felt as if we were in the embrace of these ancient mountains. Every time we rounded a curve, I felt my heart sing, buoyed by one amazing view after another. At one point I stopped taking pictures, aware that my camera could never capture the feeling of awe and majesty these mountains inspired.

While it may sound strange, I loved feeling so small, humbled by the glory all around me. It was clear that no human could ever create anything so grand as what my eyes beheld.

For the entire month that we were in Ammaji’s small, yet charming ashram (Tapasyalayam), I felt as if I had landed in heaven. Life was simple and pure here, the air fresh and clear. The ashram was located in Netala, a small village just north of Uttarkashi, a popular place of pilgrimage for spiritual seekers and religious scholars. The entire district, or state, of Uttarakhand is referred to as Devabhumi, or the ‘land of the Gods’ because of the centuries long history of India’s ancient sages living and practicing there. The people who live in Uttarkhand, and particularly in the small villages that dot the countryside around Uttarkashi maintain the ancient and sacred traditions of their ancestors.

Situated as the ashram is on the banks of Ganga, I slept and awoke every morning to the sound of her waters rushing by.

Following my daily hot shower (water heated by the solar panel on the roof), I meditated overlooking the river, captivated by the ever-present energy of these sacred waters.

Two very different experiences stand out about the month I spent at Ammaji’s Himalayan ashram. One of them was the daily influx of about 30 children who came for tutoring and puja (Wikipedia’s definition: Puja is the act of showing reverence to a god, a spirit, or another aspect of the divine through invocations, prayers, songs, and rituals. An essential part of puja for the Hindu devotee is making a spiritual connection with the divine.) After the childrens’ tutoring sessions, we (adults) could join the children gathered in front of the small cave temple, attend Arati and sing bhajans (Hindu devotional songs with no fixed form: it may be as simple as a mantra or kirtan). 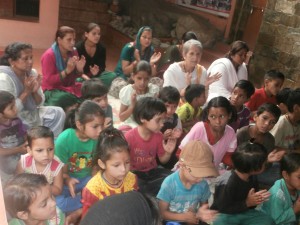 The children came from nearby villages, some of them walking for miles to get there and I, of course, fell in love with many of them. There was a sweet innocence about them as they attended those daily prayer sessions and sang their hearts out in honor of the many Hindu gods and goddesses that belong to this land. They were entranced by the simplest things, including my camera. For them, electronic devices like computers and iPads were fantasies, at best. My heart went out to these kids. Most of them looked as if they came from relatively poor families; their clothes were obviously hand-me-downs from older siblings or perhaps from India’s equivalent of Goodwill stores. When I asked Ammaji what it would cost to adopt or support one of these children for a year, she told me that while that might be a well intentioned gift, the only real way to make a difference in these kids lives would be to pay for their education all the way through college. This was yet another reality check and a commitment that I knew I would be hard-pressed to keep, as much as I might want to. I was deeply touched touched by these children, along with the women of Ammaji’s ashram who welcomed me with open arms and a charming curiosity. Even though we are now half a world apart, the sweet memory of the time we shared lingers in my heart.

My second most stunning experience at Tapasyalayam (other than dipping 80% of my body in the freezing cold glacier fed waters of Ganga one day) was participating in the celebration of one of Hinduism’s most sacred events: Ganga Dasahara.

Every year in May or June (depending on the position of the planets), Hindus celebrate the descent of the sacred Ganges from heaven to earth. One truncated version of the myth surrounding this event is that Lord Siva had captured Goddess Ganga in his hair as a way of teaching her a lesson. Beseeched by other heavenly entities, Lord Siva released the flow of the river and allowed her to flow onto earth. Ganga, amongst the multitude of India’s rivers, has come to earth as a magnificent blessing to all who drink her waters (safer in these upper regions of the Himalayas) and bathe in her sacred waters.

To give this occasion and more about my time in India the attention it deserves, I’ll continue the description of this experience and the months that followed in my next post, India, Part 3! Hope you’ll stay tuned, as the adventure continues.